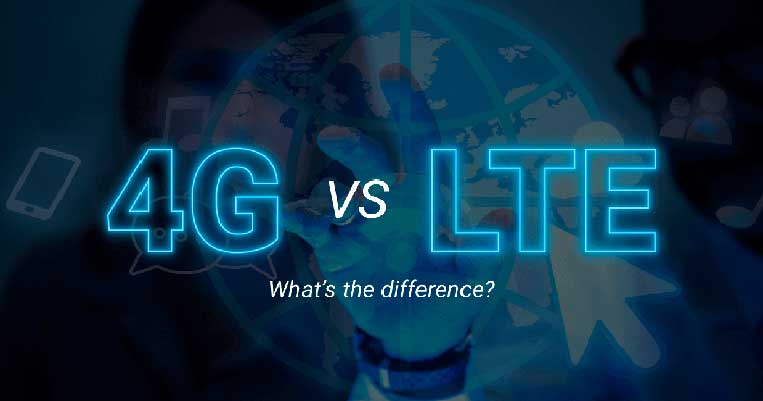 LTE vs 4G: What Are the Differences?

4G, LTE... what are those symbols on our phones, and what do they mean? Is one better than the other? Is one faster than the other? Let’s look at the difference between the two terms and see what this means for your cellular performance.

Networks are classified into generations based on speed, connectivity and reliability standards set forth by the International Telecommunications Union-Radio communications sector (ITU-R). 4G stands for the 4th Generation of telephone service. We’ve been through 2G, 3G, are currently in 4G and are rapidly headed into 5G. 4G Standards were developed in 2008 and they have slowly replaced 3G. 4G is faster than 3G by a long shot. 4G is the general standard now and is considered fairly fast in today’s world. It has more capacity than lower generations and thus, less bandwidth caps. Of course with the advent of 5G, this will change the game tremendously, but 4G isn’t going anywhere for awhile.

A 4G or 4G LTE phone takes advantage of this generation’s standards. You can still use your 3G phone on the 4G network, but 4G is about 10 times faster than 3G services, and 3G is slowly being phased out or at least not supported.

LTE is the technology behind 4G. It stands for Long Term Evolution. It usually shows up on your screen as 4G LTE. It was a standard developed when 4G was designed for the purposes of phones and towers and other devices to talk to each other. There were other standards developed at the same time called UMB (Ultra Mobile Broadband) and WiMax, but LTE is the global standard technology for cellular communications. It is an open, interoperable standard used by virtually all carriers. All major smartphones use LTE today. In fact, there is no such thing as true 4G as defined by the standards set forth. 4G was defined as the ideal standard and as no phones actually can reach this standard, so they defined LTE. Even if your phone is advertised as 4G, it uses LTE technology.

LTE provides high speed mobile and broadband data, telephone service, and supports public safety functions. In fact, the public safety network gets their own frequency on the LTE spectrum. LTE also has special features to manage the network. First, it can assign priorities to customers. Emergency calls get a higher priority for calls than someone like me. If there are many folks on the network, the priorities will decide which call gets through first and which one might get dropped. One other feature of LTE is that it is a self-organizing network, meaning that if there is an outage, the calls will be rerouted to another path automatically and once service is restored, the network will revert back to its optimally designed path.

LTE-A, LTE-Advanced and LTE+ are all names for the same service. It is the advanced or upgraded version of LTE, which is faster, more stable, and has higher bandwidth availability than regular LTE. This results in less buffering and faster downloads. Data rates are higher with peak download speed of 3 Gbps and Uploads at 1.5 Gbps. That is 2-3 times faster than regular LTE speeds. LTE-A is the closest there is to true 4G speeds, but not quite there.

The network can use what is called carrier aggregation, which combines up to 5 signals that let data pass through antennas simultaneously. This allows different carriers to combine the bandwidth signal and provide faster speeds. There is also a technology called MIMO which means multi-input and multi-output. This means the signal can be transmitted and received through multiple antennas. These two technologies combined provide between traffic management of bandwidth, which results in more reliability and faster speeds. Coverage is increased via relay nodes as well, which fills in gaps in the network.

5Ge is AT&T's name for 4G LTE-A. In other words, it's just 4G, and there's nothing "5G" about it. If you see you're getting 5Ge service on your AT&T phone, that means you're getting LTE-Advanced service.

Even with LTE-A features, the 4G network is getting crowded. There are new users added all the time and they are all sharing a limited amount of space. So It’s time to upgrade the network. Every ten years or so, the ITU-R comes out with new standards and new technology. 5G is next. This is the 5th Generation of telephone service and promises exponentially higher speeds and infinite possibilities. It also opens the door for new technologies such as smart appliances, self-driving cars and complex online games. 5G won’t be available everywhere for a while. 5G relies on cell sites that are closer together and so far, this is possible only in more populated urban areas. Conversely, 4G is slower, but travels longer distances. Your 4G phone will still work for the foreseeable future, but it won’t be able to take advantage of this new network.

What does this all mean?

So, LTE is the current standard. LTE-A is a more robust version. They still don’t reach true 4G speeds. It is possible to get closer to the 4G standards with newer technology, but most of the time, you are probably not going to see a huge difference. The LTE network needs to be upgraded to handle higher 4G speeds as well. It’s important to check with your service provider to see if you can take advantage of actual 4G speeds in your area or maybe wait to upgrade to a 5G. In the meantime, it is always an option to have LTE and add a cell phone signal booster to enhance speeds.

How to Build a Strong WiFi Network

Your home or office WiFi network is your lifeline to the world. build ou...

What's Going On with the Global Chip Shortage?

Almost every electronic device uses a chip to make it run. “Chips,” or s...

CPE Antenna Guide: All You Need to Know

There are many antennas on the market currently, both for cellular and WiFi signal. If...